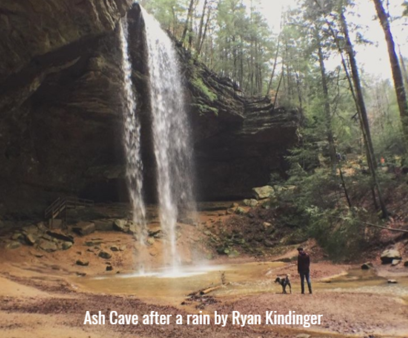 Why You Should Visit

At 700 feet long, 100 feet deep, and 90 feet tall, Ash Cave is the largest recess cave in not just Ohio but the entire Eastern United States! When settlers first came across this cave in the 1800's they found a pile of ashes nearly 100 feet wide and three feet deep within the cave, and thus named it Ash Cave. A tributary of Queer Creek flows off the top of the cave and is believed to be the tallest waterfall in the state by many. However, the waterfall's flow is sporadic at best, and you're going to have to come right after a heavy rain if you want to see it flowing like it is in the picture above.

Getting to Ash Cave Falls
Ash Cave is located in the southernmost portion of Hocking Hills State Park and its address is 26400 State Route 56, Creola, Ohio. The area is well marked and easy to find. There is a large parking lot outside the trailhead that will likely be filled with cars. Take the paved trail .25 miles up the gorge and you'll be at the cave.