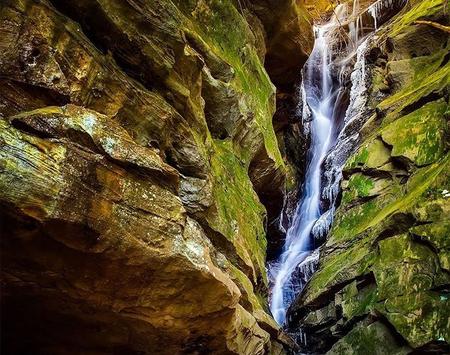 Located in the Old Man's Cave area of Hocking Hills State Park, this waterfall doesn't get a fraction of the crowds the area's other waterfalls do. Broken Rock Falls spills down a tributary that flows into the creek downstream from the Lower Falls. This is without a doubt one of the most unique waterfalls in Ohio. The waterfall received its name "Broken Rock" because it looks like it's cutting a giant rock right in half. This waterfall never looks big in pictures, but I can assure you it's absolutely massive.

Difficulty to reach: Easy to Moderate

Getting to Broken Rock Falls:
Broken Rock Falls is located at the Old Mans Cave Area in Hocking Hills on State Route 664. The Hocking Hills Area has become incredibly touristy over the past few decades and has become very well marked in the process, so you shouldn't have too much difficulty finding anything in the park. After locating Old Mans Cave, park and head towards the visitor center. From here, take the trail in to the gorge and then turn right (downstream) onto the Grandma Gatewood Trail. Take this trail all the way to the base of the Lower Falls. Cross the creek just downstream from the Lower Falls and climb up the steps and turn left when you reach the top. 91 steps later (broken up over several sequences) and you will be at Broken Rock Falls!