The smallest of the 3 waterfalls at Englewood, Oaks Falls was perhaps named for the Oak Trees that surround this waterfall making it almost impossible to view. This waterfall really isn’t much, but since it’s pretty close to Patty Falls it’s worth visiting anyway. 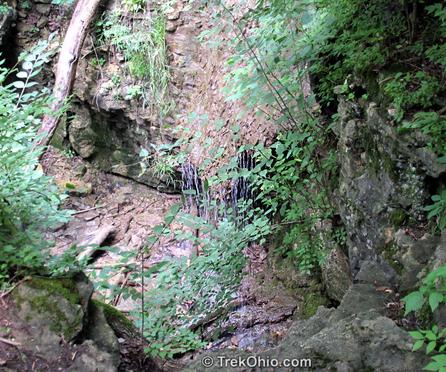 Patty Falls is a bit smaller the Martinsdale Falls but usually has more water than Martinsdale, so if it hasn’t been particularly rainy your best bet to see a waterfall in the park is likely here. The waterfall slides down a rock face before dropping about 8 feet down into the creek below. Behind the waterfall, a recess cave has formed which is a bit larger than the one at Martinsdale. 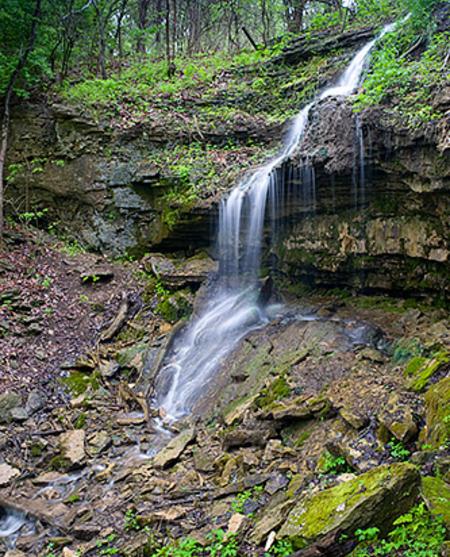 Getting to the Waterfalls:

All 3 of the park’s waterfalls can be found on the Green Trail, a 3.8-mile loop trail that takes you around the park. The best way to see all of the waterfalls is to simply hike the entire trail, which begins on the park’s only trailhead on Patty Road. Take the trail in a Counter-Clockwise direction, so you’ll head up the road before turning right into the woods. After going through the woods for a little bit, you’ll pass by Oaks Falls. After the waterfall

The tallest and most impressive waterfall in the park, I only say this waterfall is “Easy-Moderate” in difficulty to reach because you have to hike over 2 miles round trip to visit it, which is sadly pretty far for Ohio. Martinsdale Falls slides off a cliff face into a small ravine. A tiny recess cave has formed behind the waterfall. Martinsdale Falls doesn’t usually have an insane amount of water flowing down it, so it’s best to view it after a rain or in the springtime. 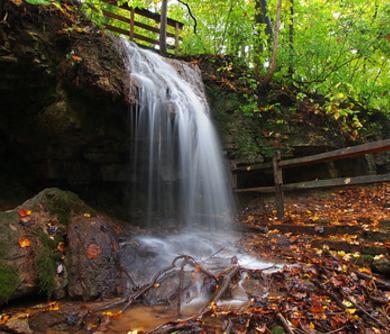 Since almost all of Western Ohio is characterized by flat farmland, it’s always an amazing surprise to discover new waterfalls in the region. Located near Dayton, Englewood MetroPark has three, making it one of the most waterfall abundant parks in all of Western Ohio. The park is part of the Five Rivers MetroParks System and encompasses 1900 acres of wetlands, forests, and small stream valleys. Although none of the waterfalls here ever have a ton of water flowing down them, they are quite impressive for their location in Ohio.