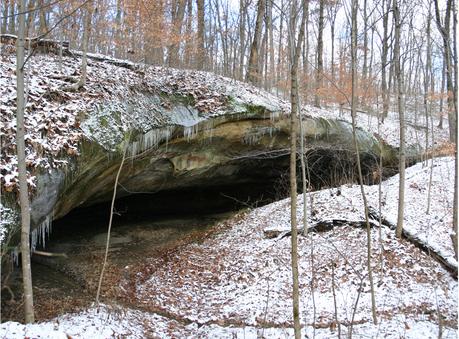 Tinkers Cave is one of the most interesting features of the Wayne National Forest. The cave, according to early settlers, was large enough to stable 20 horses. Tinkers Cave is a large overhang cave similar to those of the Hocking Hills region (Ash Cave, Old Man’s Cave). The cave was named after one of the most interesting men in Ohio history. Born in 1810 into a wealthy family, Shep Tinker was an infamous horse stealer who used Tinkers Cave to hide the horses he stole. He would nab horses from Southern Ohio, auction them off in the north, and on his was back down south he would take even more horses. In 1830, he was convicted of stealing a farmer’s horse, which, ironically, he didn’t do. Tinker was sentenced to 6 years in jail, but after he was released his illegal deeds continued. In 1845 was arrested for counterfeiting coins. After seducing a girl who fed him his prison meals to free him, Tinker fled Ohio and over the next decade found himself in jail in 4 different states. In 1955 he returned to Ohio and decided he wanted to run for Justice of the Peace, claiming no one would be better at handling criminals other than him, the best criminal in all the land. He lost the election, and later was arrested for stealing horses. 7 years later, he ran again and actually won, only to discover he was ineligible for the position.