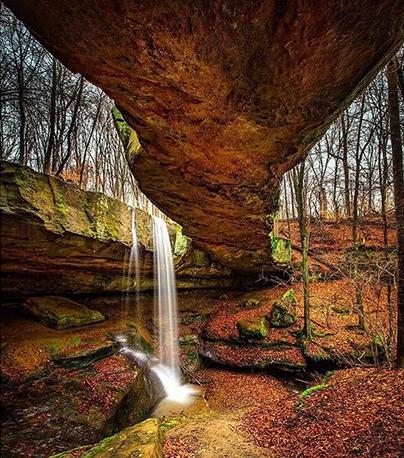 Natural Bridge Trail:
1 mile, Moderate
At the end of the connector trail the Natural Bridge Trail can be accessed by turning to the left. The trail winds through the woods and takes you to Rockbridge and Rockbridge Falls. From here you can take a spur trail down to the Hocking River, which serves as an access point for kayakers. The trail loops back to the connector trail and passes the turnoff for the Rock Shelter Trail along the way

It is not too often that the words “natural bridge” and “Ohio” are said together in the same sentence. Only a dozen known natural arches exist within Ohio state boundaries, and even that number comes as a surprise to many. At 100 feet long, Rockbridge is easily Ohio’s largest natural bridge and is unofficially the 9th largest natural arch east of the Mississippi River. The arch ranges from 10 to 20 feet long and towers high above a ravine, with the 40-foot Rockbridge Falls flowing off a cliff face no more than 5 feet upstream from the bridge. The preserve contains much more than just the natural arch; The park lies adjacent to the scenic Hocking River and a 2.75-mile trail system extends throughout the preserve.