Situated halfway up a 150-foot Blackhand Sanstone cliff, Rock House is the only “true” cave in Hocking Hills. All the park’s caves, like Ash Cave and Old Man’s Cave, are actually just overhang caves. Rock House is over 200 feet long, 25 feet tall, and up to 30 feet wide in some points. Supporting the cave is 7 massive arches, which seem almost too impressive to be a product of nature. If you’re visiting during the spring, a small waterfall may flow adjacent to the cave, but don’t count on seeing it regardless of the season. Rock House’s beauty has been enjoyed by people for nearly 200 years. In 1835, Colonel F.F. Rempel constructed a 16-room hotel nearby so people could visit Rock House. Colonel Rempel’s Hotel is long gone, and instead the Rock House Shelter stands in its place. 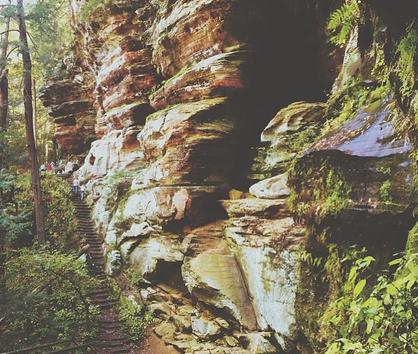