Located just minutes from the Ohio-Pennsylvania Border, Quakertown Falls would be one of the most scenic waterfalls in Ohio if the OH-PA border was pushed just an extra half mile further east. The double-tiered waterfall almost always has impressive flow and below the waterfall is a short but spectacular rugged gorge. Right upstream from the falls is the remnants of an old railroad bridge that is so damaged it looks like a stiff wind would send it tumbling into the creek and over the falls. If you’re rather adventurous you can actually walk behind the waterfall midway up the falls, but for safety reasons I can’t advise doing this. I’ve also seen pictures of people cliff jumping from midway up these falls, but I have a hunch jumping here isn’t legal whatsoever. The waterfall doesn’t seem to be part of a park but it is likely it is part of an undeveloped preserve, as no “No Trespassing” signs can be found near the falls and a small network of dirt roads loop around the land adjacent to the waterfall.

Getting to Quakertown Falls:
No signs will direct you towards Quakertown Falls, which means finding the waterfall can be a tad difficult if you don’t know where to look. If coming from Ohio on US 224 (also known as West State Street in PA) cross the OH-PA border and pass the intersection with Quaker Heights Rd right after the border. Continue on US 224 for a quarter mile until Quaker Heights Rd intersects with the road once again. A small dirt road turnoff on the left side of the road is just a few hundred feet past this intersection. Follow this road down and stay right. The waterfall is off the right side of the road a few hundred feet in. To get to the waterfall you’ll need to descend down into the gorge, which shouldn’t be an incredibly difficult task if you’ve had any experience hiking off-trail. 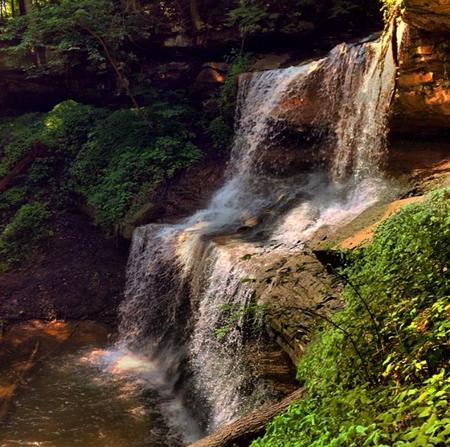