Lake Katharine State Nature Preserve shares many similarities to the nearby Hocking Hills State Park, but is significantly less crowded. The centerpiece of the preserve is Lake Katharine, which is surrounding by steep rocky cliffs. Rock Run Falls (also known as Lake Katharine Falls) is also located in the park. The park’s forests consist of a beautiful mixture of Eastern Hemlock, Beech, Sweetgum, and Birch trees. 6 miles of trails run through the park 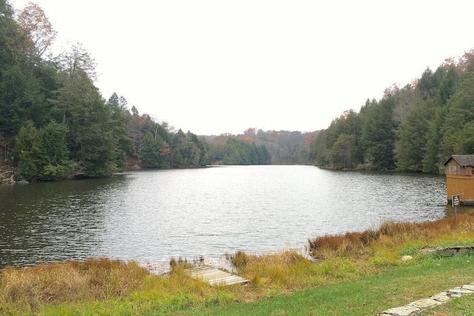 1 mile, Easy to Moderate
Trail Description: Trail got its name because part of the trail is lined with Mountain Laurel, which was originally known as Calico Bush by early settlers. The trail goes past several moderate sized rock outcroppings and runs along the side of a steep bluff

Salt Creek Trail
2.5 miles, Moderate
Trail Description: Incredible trail that runs at the base of massive sandstone cliffs and sometimes even goes under the cliff. Trail will leave the rocks and take you on a boardwalk through a wetland and then through a pine forest as it makes it way towards Salt Lick Creek.

Trail Description: Probably the most beautiful trail in the preserve, trail stems off from the intersection of the park’s other trails and follows the edge of a rocky cliff and through a hemlock forest. The trail passes by Lake Katharine and then takes you over Rock Run Falls, a small but beautiful waterfall