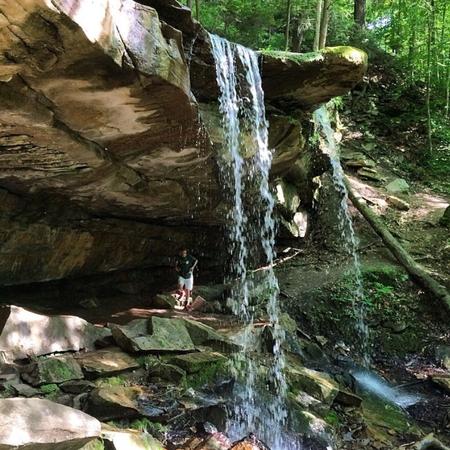 One of the four major waterfalls in McConnell’s Mill State Park, Kildoo Falls isn’t particularly tall or wide but makes up for its size by being unlike any waterfall in Ohio or Western Pennsylvania. The waterfall flows off a flat overhang rock under Kildoo Bridge and shoots off the rock in two distinct narrow plumes during normal flow. During high water I can imagine the creek flows over the entire rock, which would probably be even more incredible than the two plumes. Below the waterfall the creek cascades over a series of small falls, dropping an additional 30 feet until it passes under the Kildoo Trail and spills into Slippery Rock Creek. Since Kildoo Falls spills off an overhang rock, a small recess cave has formed behind the falls, allowing you to walk behind the falls while staying dry.

Getting to Kildoo Falls:
To reach the waterfall from the center of the park (2697 McConnell’s Mill Road, Portersville, PA) take Kennedy Road downstream. Right before the Kildoo Bridge turn left onto Kildoo Road then turn left again and park at the Kildoo Picnic Area. Retrace the route of your car back to the Kildoo Bridge and descend down to the falls.

Nearby waterfalls:
The towering 60-foot Alpha Falls, the difficult to reach Breakneck Falls, and the dependable Hell’s Hollow Falls are all also located in McConnell’s Mill.