One of Northeast Ohio's finest parks, The Gorge Metro Park is part of the Summit Metro Parks system and encompasses 155 acres of rugged land surrounding the Cuyahoga river. One of the most defining features of the park is it's massive dam, which likely soon will be torn down, revealing a huge waterfall that's been underwater for almost a century 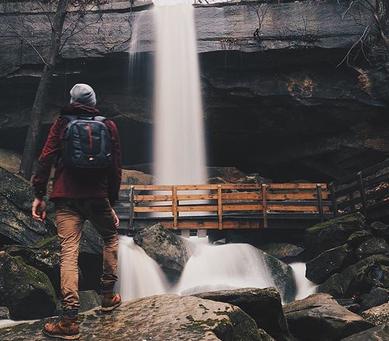 Trail description: The Glens Trail begins on the opposite side of Front Street from the park's lot. The trail gives views from the edge of the Cuyahoga river and you can see springs flowing from the rocks.

Trail description: The Gorge trail is the most popular trail of the park. After first passing the massive concrete damn, you'll come across Mary Campbell cave, a large recess cave that housed a kidnapped child many centuries ago. The cave shares many similarities to the recess caves of the Hocking Hills Region of Ohio. After passing the cave, the trail becomes rather rugged, passing through rock ledges and then descending downhill to get closer to the river. The trail heads back to the parking lot now, passing by a seasonal 10-foot waterfall along the way.

The Highbridge Trail follows the rim of the Cuyahoga Valley opposite the Gorge and Glens Trails, giving you a more isolated hike. The trail connects to the Cascade Valley Metro Park, which is just to the south of the Gorge Metro Park.