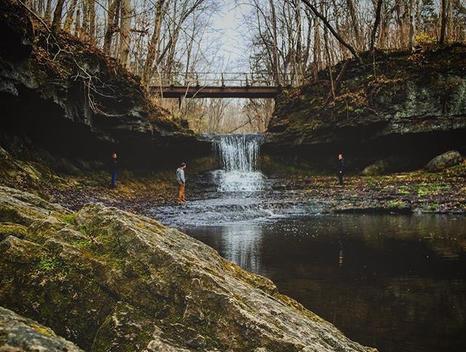 Trail begins at main entrance with the Pine Forest Trail and crosses over Yellow Springs Creek before splitting to create a large loop trail. By going in a clockwise direction, you will follow the creek upstream, passing a spur trail for Pompey's Pillar, an unique rock spire. After the pillar, the trail will take you to Grotto Falls, a small seasonal waterfall that flows over a small cave. The trail will head uphill and pass the "Yellow Springs" for which the town was named after. After trekking through an upland forest, you will reach the 10-foot Glen Helen Falls, which is also known as  "The Cascades". The trail follows Birch Creek downstream back to Yellow Springs Creek and back to the parking lot.

Although the 1000+ acre Glen Helen Nature Preserve contains countless amazing landmarks, one of the park's more unique features is the natural spring for which the city of Yellow Springs was named after. Other than the spring, The park contains waterfalls, an Indian Monument, a pine forest, interesting rock formations, a gorge, and over 20 miles of trails

Other trails:
While the Pine Forest and Inman Trails are the most well marked trails in the park, many other miles of trails cross through the park, passing by many beautiful sites. Check out the map to get a better idea of where all these trails going and how long they are.