Getting to Big Run Falls
Once in Cascade Park cross over the creek and park at the lot across the street from the Picnic Area. You can view the falls from here, but if you want to get closer you can hop the fence and follow the steep but visible path leading to the base of the falls.

Big Run Falls (also known as Cascade Falls) is perhaps the most impressive urban waterfall in all of Western Pennsylvania. Although not incredibly tall or wide, the falls are incredibly powerful and consistently flowing, making this a very reliable waterfall to visit. I visited Big Run Falls after a 10-day dry spell, and the falls looked like they were at post-thunderstorm levels. Big Run Falls is located within the City of New Castle’s Cascade Metropark and was once the site of an amusement park that opened in the late 19th century. The park was popular during the early 20th century, receiving over 7,000 visitors on some days. However, by the mid 1900’s the park was losing popularity, and in the 1980’s the City of New Castle tore down the park rides in an attempt to return the park to its natural beauty. You can still see the remnants of the amusement park scattered across the gorge downstream from the falls. 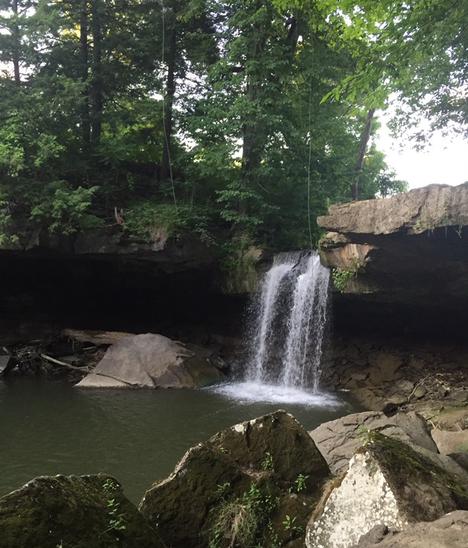