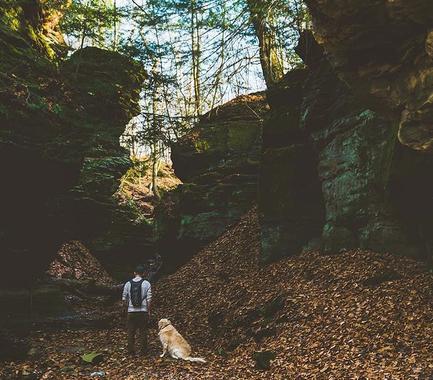 Getting to Ansel Cave Falls
To reach the cave and waterfall, enter the park and drive until the road ends at a large parking lot. Take the 1.5-mile Ansel Cave Loop Trail out of the left side of the lot and stay right when it connects with the Ansel Cave Connector Trail. After intersecting with the connector trail you’ll reach the beginning of the loop. To reach the waterfall in the shortest amount of time, take a left. You’ll descend into a ravine, passing large rock outcrops before reaching the cave .4 miles from the beginning of the loop.

Nearby waterfalls:
The small Harmony Falls is located in a suburban neighborhood across the road from the southern edge of this park. One of Ohio’s most interesting waterfalls, Cat’s Den Falls, is a 10-minute drive east from here. Also in The West Woods is Affelder Falls, but no trail goes to the waterfall.

Ansel Cave and the triple tier waterfall at its head are the main natural attractions of the 902-acre West Woods Park. Ansel Cave’s name is a little bit misleading, as it is much more of a deep narrow gorge than a cave.  Ansel Cave is a fragile and geologically significant area, so Geauga County Parks ask that you view the cave and waterfall from the trail. Also in the park is Affelder Falls, a beautiful seasonal waterfall deep in the woods on the other side of the park.